When the Museo Nacional Centro de Arte Reina Sofía opened its doors in 1990, it stood as a modern, contemporary Spanish museum on an international scale. Nevertheless, its building has gone through many challenges in order to achieve this goal.

King Felipe II first founded San Carlos Hospital – current headquarters for the museum– in the sixteenth century. It was here that all of the hospitals dispersed throughout the Court were centralized. In the eighteenth century, Carlos III decided to found another hospital, as these facilities did not meet the city’s needs. The present building is the work of architects José de Hermosilla and Francisco Sabatini, who was responsible for a large part of its construction.

In 1788, the death of Carlos III brought the building’s construction to a halt. Although a mere third of Sabatini’s project had been completed, the hospital was set up and began operations as originally planned.

From that time on, several modifications and additions were made until the hospital was shut down in 1965. Its functions were transferred to the Madrid Province Health Service. In spite of many rumors of demolition, the building’s survival was guaranteed in 1977 when it was declared a national monument by royal decree, due to its historic and artistic value.

In 1980, restoration began under the direction of Antonio Fernández Alba, and in April 1986 the Reina Sofia Art Center opened. Its ground and first floors were used as temporary exhibition galleries. Towards the end of 1988, architects José Luis Iñiguez de Onzoño and Antonio Vázquez de Castro made final modifications, of which the three steel and glass elevator towers – designed in collaboration with British architect Ian Ritchie – merit special attention.

The Museo Reina Sofia, an autonomous organization depending on the Spanish Ministry of Culture, was created by Royal Decree 535/88 of May 1988. With its headquarters in San Carlos Hospital, the Collection was made up of works conserved at the time by the Spanish Museum of Contemporary Art. On 10 September 1992, their Majesties King Juan Carlos and Queen Sofia inaugurated the Permanent Collection of the Museo Nacional Centro de Arte Reina Sofía, which until then had only held temporary exhibitions. Now a bona fide museum, its goals – as set forth in the aforementioned decree – were to conserve, expand and exhibit its collections; to promote the general public’s knowledge of and access to contemporary art in its various manifestations; to hold exhibitions at the international level, and to offer training, educational and assessment activities related to its holdings.

Throughout all of these years, the Museo Nacional Centro de Arte Reina Sofia has been increasing its collections, temporary exhibits, audiovisual and educational activities, services and number of visitors, what led those in charge of the institution to undertake studies on the possibility of increasing surface space, which brought about in 2001 the construction of the new building by Jean Nouvel, opened in September of 2005. In this way the Museum responded not only to its proposed needs, but also to a clear call to transform the neighborhood’s surrounding environment. By creating a public square – as set forth in the building code of the new buildings and the southwest facade of the current Museum – a space within the city and for the city was created.

Pamphlet of the opening of the Centro de Arte Reina Sofía, 1986 (Spanish text) 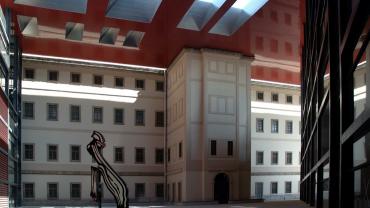 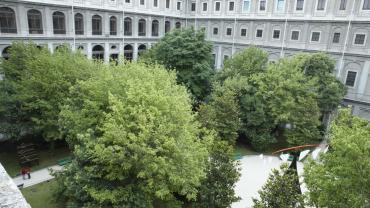