At the end of the 1960s and throughout the decades that followed in Peru, a displacement towards cultural activism operating from urban geography with interventions and actions in public space was conspicuous. The renewed forms of graphic action gained strength with the appearance of collectives and artists that approached silkscreen printing as a preferred critical tool and the socialisation of art-making outside official circles.

Images of the room 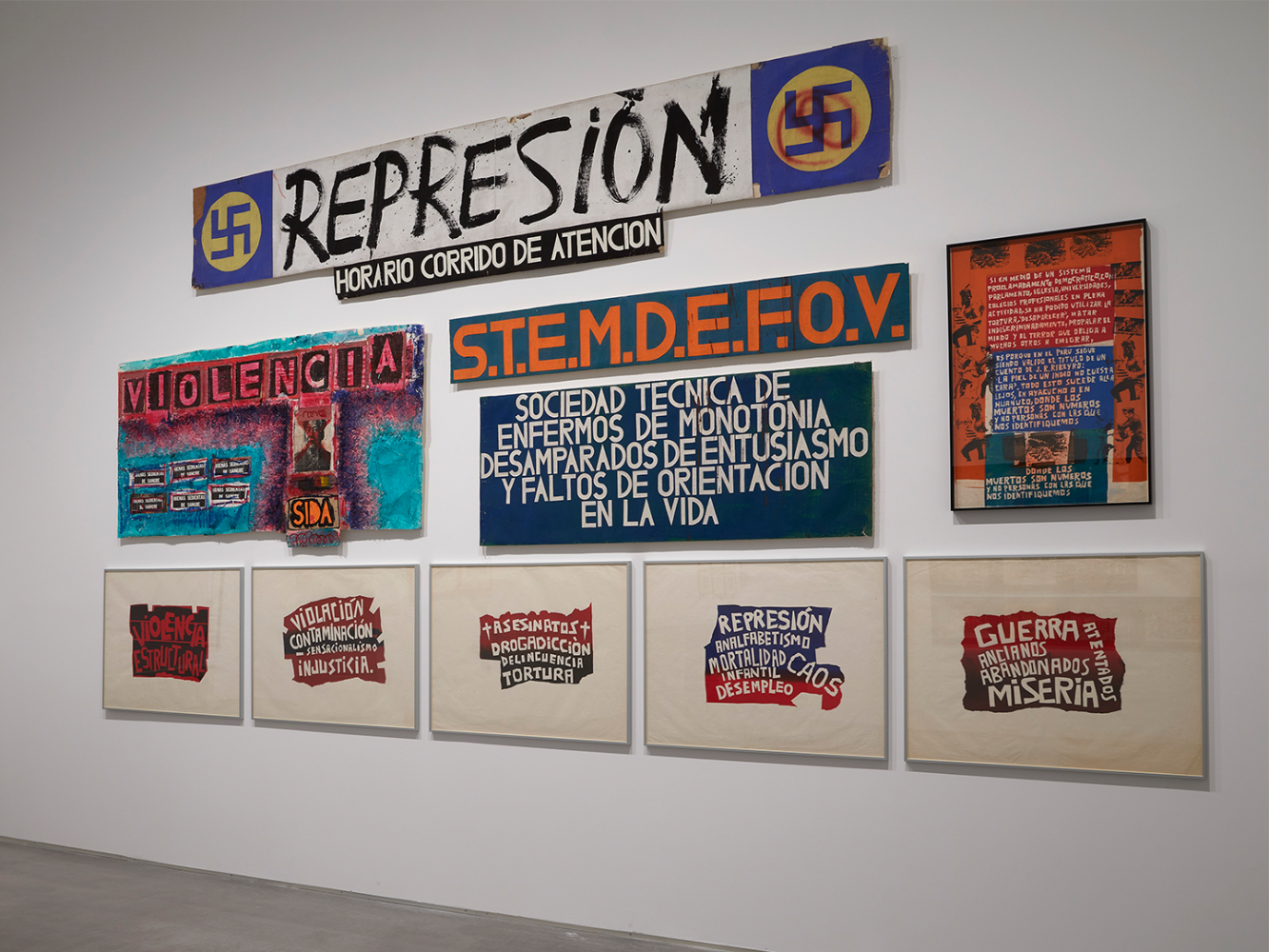 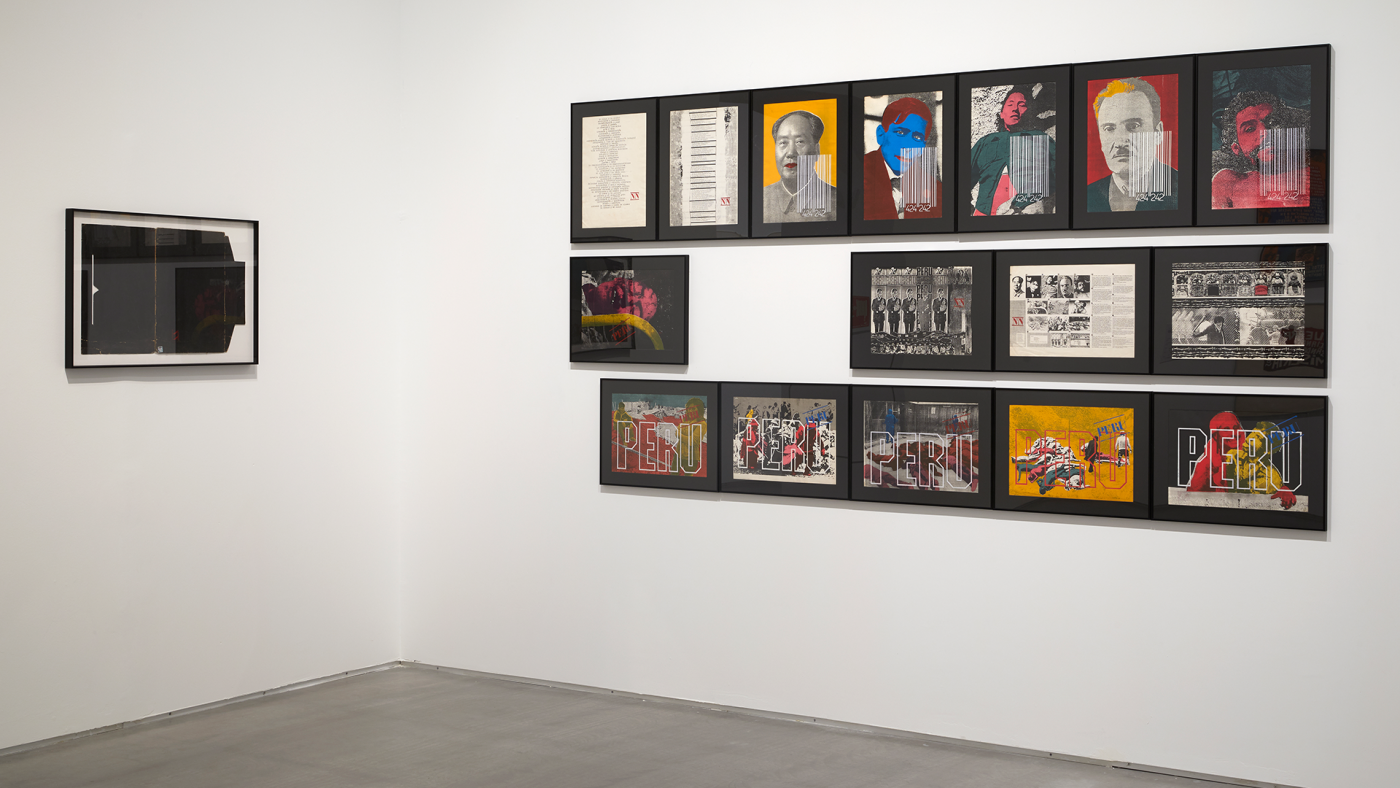 At the end of the 1960s and throughout the decades that followed in Peru, a displacement towards cultural activism operating from urban geography with interventions and actions in public space was conspicuous. The renewed forms of graphic action gained strength with the appearance of collectives and artists that approached silkscreen printing as a preferred critical tool and the socialisation of art-making outside official circles.

This practice, present in other Latin American countries such as Argentina and Chile, established a new vocabulary — reproductive, ephemeral, urban — which explored the intersection between graphic art and social and political actions, conditioning public space as a privileged arena for artistic production, controversy and denouncement. Many of these new graphic, radical and committed proposals approached the visual imagery of popular culture and the media — critically and ambivalently — and were linked to human rights movements and trade union struggles and reformulated the aesthetic of the political poster by engaging with collective and participatory making. In public spaces impromptu graphic art workshops were created with screen-printed netting and matrices, inks and photocopies, and the public were invited to participate in creating images in an attempt to spark spontaneous debate. Such is the case with artists and collectives like Herbert Rodríguez and Taller NN.

Rodríguez was one of the first to print messages of denouncement and images of dead bodies, car-bombs and mass graves on the walls of Lima, determined to grab the attention of the city’s middle class on the bloody events taking place. He deployed his work individually and collaboratively with his projects Contacta 79 (1979), Los Bestias (1984-1987) and Conexiones (1987), and through groups such as Huayco EPS (1980–1981), with his posters, made from precarious and waste materials — cardboard, newspapers, pieces of wood, leftover cloth — representative of the underground, activist circuit in Peru. Furthermore, Rodríguez promoted campaigns to make murals, designed to turn the urban space into a place of encounter, artistic intervention and social critique. By employing photocopies and screen prints, he put forward the appropriation and recycling, physical and symbolic, of political iconography, urban imagery and the aesthetic codes in the media. In the mid-1980s when the armed conflicts in the country intensified, Rodríguez forged a body of graphic work on what he called “structural violence”, comprising photocopies, murals-collage, precarious installations and a series of monotypes with that slogan, expounding the causes and manifestations of violence.

For their part, Taller NN were a collective of architecture students, active in Lima from 1988 to 1990. The NN acronym referred to corpses of war with an unknown identity. Their first and most important project was NN-PERÚ (1988), a folder of 16 photocopies coloured through a screen-printing process which aimed to catalyse a critical and ideological debate amid a serious violent crisis. The collective sought to foster discussion on the situation of terrorism cutting through the country, and not some kind of Shining Path vindication — conversely, Taller NN questioned the ambivalence of a radical communist ideology represented by the genocide insurgency of the Shining Path. The images of NN-PERÚ sought to underscore the seductive strategies of a certain revolutionary discourse and query its symbols (Che Guevara, José María Arguedas, Edith Lagos, Mao Tse-Tung…) not by monumentalising them, but rather as a tool of interrogation. A bar code with a telephone number to report acts of terrorism is added to these emblematic figures of ideological struggle, and the folder was sent out free to Peruvian intellectuals of the time for these purposes. The collective, moreover, experimented with different screen-printing techniques, constituting one of the most powerful examples of Peruvian art in that period.

Other rooms in the Collection